I've been wanting to begin painting my Epic Ork army for a long time, so with no avail I present to you a shitload of unpainted metal Orks! 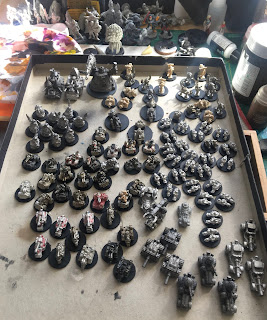 The challenge is to get 500-1000 points worth of miniatures painted every month, arranged according to the army list in the NetEpicGold version of the game.

My army will be built around two clans, Evil Sunz and Bad Moon, with the majority of them being red!

First up is the Kult of Speed, which will be painted as Evil Sunz.

The second installment (sometime after the Summer) will be Boyz, Boyz and more Boyz, and battlewagons! And I have a couple of Gargants and Stompas knocking about as well :)

The plan for this month is to splash paint on one of the KoS and some of the vehicles, hopefully reaching the proposed 500 pts.

The Spleenrippas were my first ever epic models (along with a blister of Gutrippas) some 25 years ago, so I look forward to revisiting them and the other iconic tanks such as the Bowelburnas, Gobsmashas and the mighty Skullhamma! Expect lots of red, yellow flames and b/w checks :D